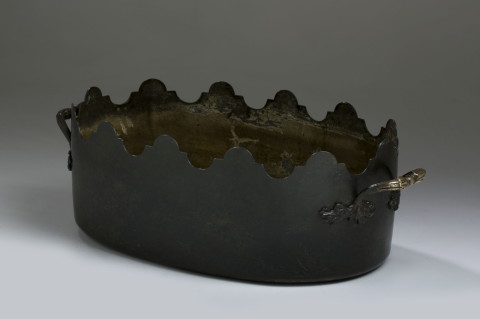 Monteiths, filled with cool water or ice, were used for chilling wine bottles and cooling or rinsing wine glasses; the latter were inverted and hung from the notched rim.  The earliest written mention of monteiths may be by Anthony á Wood, an Oxford diarist writing in 1683.

This yeare in the summer time came up a vessel or bason notched at the brims to let drinking glasses hang there by the foot so that the body or drinking place might hang in the water to coole them. Such a bason was called a ‘Monteigh’ from a fantastical Scot called ‘Monsieur Monteigh,’ who at that time or a little before wore the bottome of his cloake or coate so notched UUUU.

The earliest known silver monteith is from England and bears a date-mark for 1684/85, and some made soon afterward had removable notched rims, allowing the vessels to double as punch bowls.  The earliest record of a monteith in America may be an item in the 1701 will of William Fitzhugh of Stafford County, Virginia.  He left to his son “my Silver Monteeth Bason which I have brought out of England.”

At first only affordable by the very wealthy, monteiths also were made over the next two centuries in less costly styles and materials.  Ceramic and wooden monteiths, because of their fragility, rarely survive today, and only one glass monteith, from the late 1600s, is known.  From the 1760s onward, however, glass was increasingly popular for smaller, usually cylindrical wineglass coolers or “rinsers” with smooth rims and one or two lip-like extensions to hold the inverted glasses. 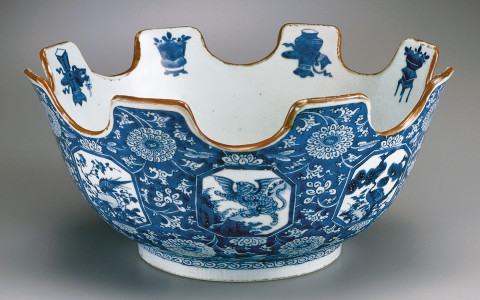 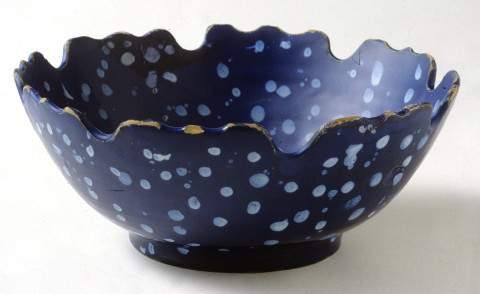 The “splashy” decoration on this monteith is a type popular on late 17th-century English and continental European tin-glazed earthenware in the bleu persan (Persian blue) style. Although scientific testing has attempted to differentiate between bleu persan wares from different countries, the results so far have been largely inconclusive. 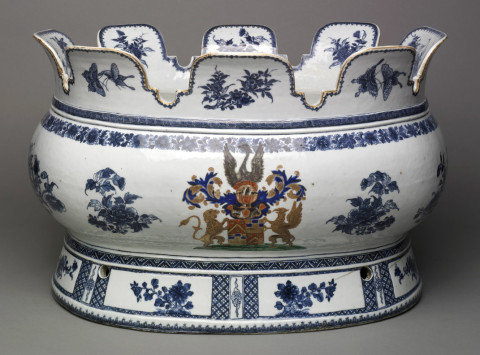 The coat of arms on this vessel associate it with the de Jonge family of the Netherlands, which was involved in the China trade as members of the Dutch East India Company.  The unusually large size of this monteith suggests it was used as a wine bottle cooler or “cistern.”  Differently decorated examples, possibly from the same mold, survive in Portugal and elsewhere on the European continent. 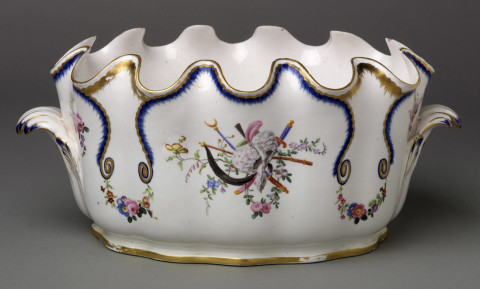 A Sèvres factory design book from about 1770 shows a monteith shaped much like this one with the title (translation) “Crenelated pail or bucket to contain glasses or liquor.” Royal services from Sèvres often contained “crenelated buckets,” also known as verrières. Somewhat similar monteiths were made at Wedgwood and other earthenware factories in Staffordshire and Yorkshire. 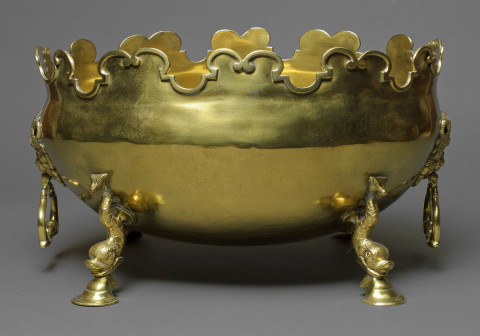 This monteith dates to the period when Nathan Bailey would have been writing his Household Lexicon (London, 1721). There, he defines a monteith as “a scallop’d Bason to cool glasses in.”  This brass example, like the pewter one, below, imitates more costly silver types. 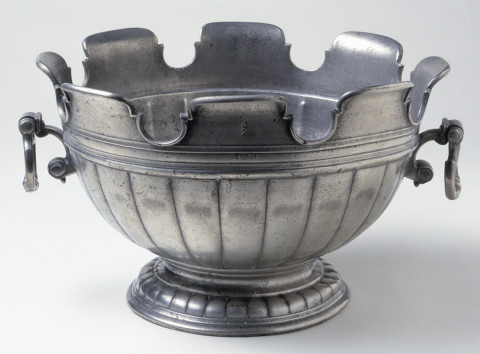 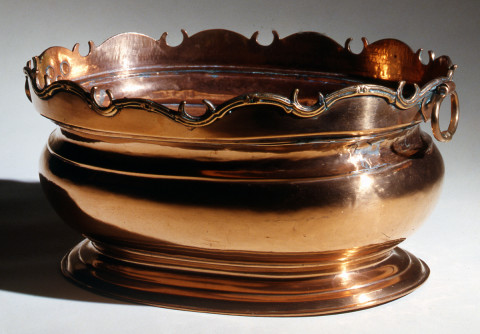 Although the example shown here has no American history, copper monteiths were known in the colonies. The low value of 10 shillings for “1 Monteith . . . in the kitchen,” listed in the 1742 estate inventory of Williamsburg, Virginia, resident Henry Hacker, indicates it probably was made of copper, brass, or pewter. 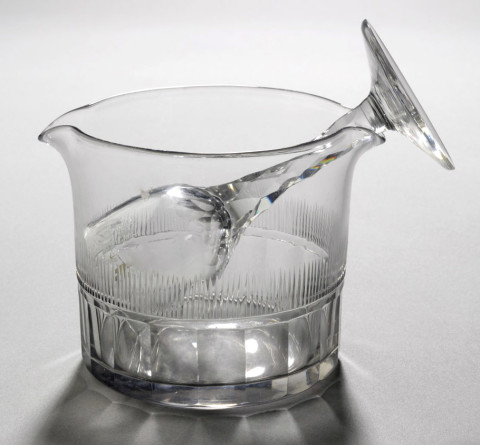 Wine rinsers could be filled with cool water to chill wineglasses or rinse them before a new wine was poured. Although rare, sets of rinsers do survive. Early documents and paintings indicate they were placed next to individuals at the dinner or supper table.  Cyrus Redding, in the 1839 Every Man His Own Butler (London) tells us

In all cases wine-glass coolers, with the coldest water, should be laid out on the table and the glasses reversed in them. No one should pour out more wine with his dinner than he intends to take at one sip, and then immediately reverse his glass