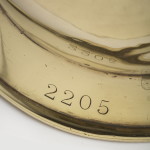 Two types of capacity measure were developed with one to measure liquids and the other for solids such as seed, grain, salt, sand, coal and shellfish. Some quantities were common to both systems but were not necessarily of the same size. Many different standards existed until the Weights and Measures Act of l824 set new standards though many of the old standards were used until the end of the 19th century.